Educating children for a future that already exists 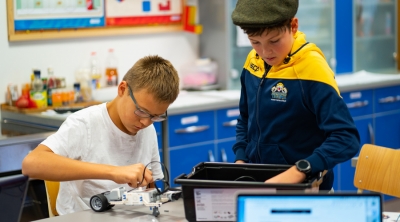 According to a recent World Economic Forum report, 65% of children currently in Primary School will enter a job that does not yet exist. The fastest growing job sector is the ‘Gig Economy’, whereby people are not employed in the traditional sense, but instead sell their skills on an open market. Some estimates indicate that around by 2022, 40% of all jobs will be in the Gig Economy.

David Price, in his best-selling book, “Open, How we will Work, Live and Learn in the Future,” proposes the idea whole new landscape of the job market. He argues that groups of people are likely to group together, offering a range of skills for hire. Of course, this more flexible, uncertain work place demands new skills and attributes, and certainly adaptability.

The traditional educational model, centered on a teacher, in which knowledge is transferred, remembered and tested, seems increasingly irrelevant and unfit for purpose.

But this model is cheap and simple to operate, and perhaps even more importantly, it’s easy to test. As such, governments around the world often favor it; very few, seem to be willing to challenge the model.

In times of change learners inherit the earth; while the learned find themselves beautifully equipped to deal with a world that no longer exists.  - Eric Hoffer

One of the other problems with this system is that it promotes and values one approach to learning; there tends to be one type of student who is ‘good at schooling’. Of course, experience tells us that many of the most brilliant and successful people in the world were not ‘good at school’; they became successful almost despite the school system.

Dan Pink, in his book “A Whole New Mind” suggests that success in the future may depend far more on right-brain thinkers, and that creative thinking will be the stuff of entrepreneurialism.

So, what are the skills, attributes and values our children need to possess for the realities of this inevitable future?

One major dilemma we face is the fact that no matter how innovative we want to be, the reality of university entrance still means that students have to do well on external examinations.

Put simply, preparing our students to do well at external exams is important, but on its own it is no longer enough. Equally, to prepare students for the reality of their future is important, but without great exam results, it is not enough. The real challenge for the very best schools is to be able to do both.

While searching for solutions, where better to then Harvard University? David Perkins, Dean of the Harvard Graduate School of Education, talks about the idea of ‘beyond’.

All great international schools know they must uphold and continually improve their success with external exams since they provide the pathway to further educational opportunities for students. But at the same time, they recognize they must prepare students with the skills, attributes and concepts that equip them for a fast-changing, globally connected, technology-rich future.

We have a saying where I come from in the UK that seems quite relevant to standardized education and testing.

“You don’t make a pig any fatter just by weighing it”.

Written by Andrew Derry, Director
The International School of Belgrade