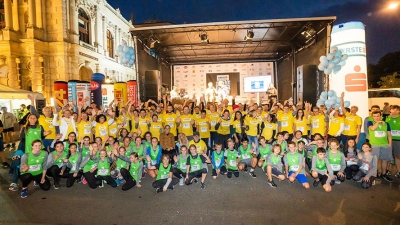 The 13th annual Vienna Night Run was on Tuesday September 24th and over 60 runners from AIS Vienna took part.

The group of runners from AIS were primarily from the MS/HS Cross Country team but the group registration was open to the entire community and there were teachers, parents, siblings and friends taking part.

Overall the charity raised more than 30,000€ this year. This means that more than 1,000 cataract eye operations can be financed in the poorest regions of Africa.

The Vienna Night Run includes almost 30,000 runners in a 5 kilometer race around the Vienna Ringstrasse. As the title suggests the race is after dark with the first block starting at 20:15 and the last starting at 21:10.

It was a late night for the AIS team comprised of mostly middle school students but it didn’t seem to bother the youngest runner of the AIS teams who was an 8 year old 3rd grader who finished in 30.42.