ASW Artists at the Refugee Center 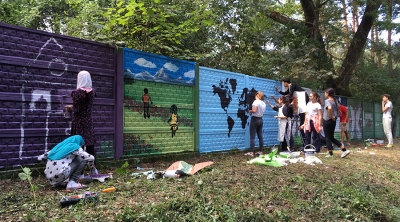 The ASW students paint murals at the refugee center

On September 6 and 7th, a group of eleven grade students travelled to Linin Refugee Centre as part of their CAS Jump Start activities. After being taken on a guided tour of the Centre, including visits to the kindergarten, workshop rooms, and residential quarters, the students embarked on the main task they were there to accomplish. Some twenty square meters of a wall were about to be covered with murals. To do that, the students developed their own projects and created big-format stencils.

While the majority of students were busy preparing the painting task, two students who could speak Russian laid out over one hundred colorful children’s books on a blue blanket on the grass. These books, mainly in English, were donated by ASW community. The two students invited any residents who were passing by, children with their parents, to come and help themselves to the books. The two students also took down the names of any ‘dream books’ that the refugees had always wanted to read but could not afford or had not been able to find in Poland. Thanks to a grant from ACTL, ASW will be purchasing these books for the refugees.

The blue blanket covered in books had another, unexpected effect. It encouraged the younger residents on the campus - kindergarteners and a number of older children - initially shy - to get closer and closer to the ASW muralists. Eventually, when they got really close to the painting stations, they dared to pick up brushes, soak them in the paint and - in quite a saweresque fashion - began painting the unpainted parts of the walls. With these new appropriations, the space that was about to be covered with murals increased considerably. It almost tripled!

By the end of two days, the collective of mural painters accomplished the following works - a White Butterfly and a Purple House - completed by two groups of refugees. Butterflies and the concept of ‘home’ are recurring themes in children’s literature that deals with the experience of migration. It was compelling to see how they emerged on the walls of the Linin Centre.

When the resident children got themselves going, it was very difficult to stop them, but the ‘goodbyes’ and the ‘seeyanextimes’ had to be spoken.