AISV at the 7th “I speak, you speak – we communicate!“ 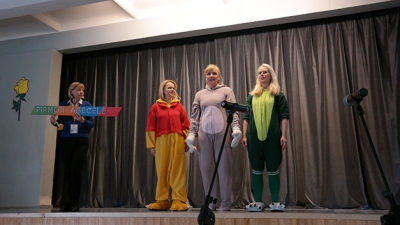 After six years of hosting this unique Lithuania wide Multilingual Tournament "I Speak, You Speak - We Communicate", AISV gave Panevėžys Juozas Miltinis Gymansium an opportunity to welcome more than sixteen teams from more than ten towns of Lithuania this year.

Student teams consisting of three members demonstrated their language skills by performing assignments such as impromptu speaking on a selected “tweet”, cultural kahoot, IDENTIK chain describing a picture in three different languages, creating a social ad on the theme chosen, and writing an application letter based on a cv of a historical figure of Lithuania and a job or university application ad. For the homework assignment, teams had to present an idea for a mobile application called “Give an Idea to Multilingual Lithuania”.

The participants were Grades 9-12 students who formed teams of three students each of them being able to communicate in no less than two non-native languages (the language of instruction at school like English at AISV did not count). We heard a number of languages at this tournament including English, French, German, Russian, Polish, Norwegian, Esperanto, Spanish, and other.

AISV had one team Virginija Vilkelytė, William Kyle, and Artem Kyrylov. The team performed in German, French and Russian languages though Artem could use more languages. The team came to be one of the best in cultural-historical kahoot and other individual assignments including Impromptu Speaking in German by William.

Each year the event brings together a big number of enthusiastic, passionate and dedicated volunteers, students and teachers, either it is an organising committee (members of AISV, the Ministry of Education and Science, Goethe Institute, French Institute, Lithuanian Non-Formal Student Education Center, Educational Exchanges Support Foundation, DXT Technology company), evaluators or helpers, or participants to have this tournament the most exciting event of the year.

Finally, while students were performing assignments, the hosts of the tournament invited teachers to a very impressive hands-on program related to the culture and traditions of the city famous for its theater programs.

Even though a number of schools liked coming to AISV for this tournament in the past six years, it was a new experience for the tournament to reach out.

View the embedded image gallery online at:
https://www.ceesa.org/archive/news/item/2563-aisv-at-the-7th-i-speak-you-speak-we-communicate.html#sigProId4e5e7cda6b
back to top