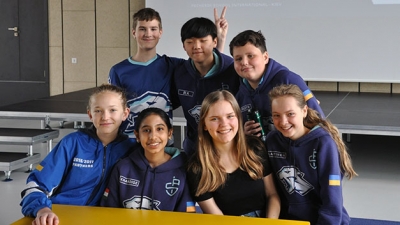 There were six visiting teams from Warsaw, Krakow, Minsk, Prague and KIS.

The first day involved the individual and team written rounds and, after a long first morning, the teams and their coaches were treated to a walking tour of Kiev, taking in the ancient sights and green spaces of the city.

After lunch the Round Robin quizzes got started and it was fingers on buzzers! After seven rounds, the teams were then seeded for the second day of quizzing and Saturday brought the double elimination stages.

With a hotly contested morning of all the teams playing each other one more time, the last teams fought it out culminating in a final involving two teams from Warsaw.

Well done both teams from the American School of Warsaw and their coaches! As well as putting their minds to this great event, a lot of fun was had by all contestants and everyone went home happy that they had given their all and looking forward to next year’s MS Knowledge Bowl event!