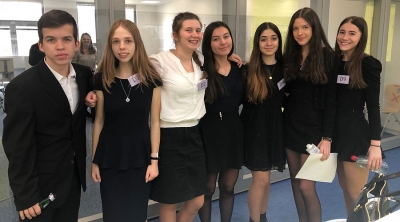 Last weekend was a very busy one at the International School of Prague as high school students from different corners of the region flooded the corridors of ISP for the CEESA High School Speech and Debate tournament. Speeches and scripts in hand, eager to win the title of the next speech and debate champion, students from Warsaw, Bucharest, Budapest, Bratislava and Prague participated in two full days of deliberating, acting and presenting.

This year’s CEESA High School Speech and Debate tournament took place on Friday 7th and Saturday 8th of February, with over 50 students matching their skills in five categories: Original Oratory, Impromptu Speaking, Duet Acting, Oral Interpretation and Debate. The resolution contended in this year’s debate was whether violent civil disobedience can be justified and all teams came prepared with strong example-based arguments. Duet Acting on the other hand brought to life various satirical and emotive pieces, whilst Original Oratory tackled a plethora of thought-provoking issues, from social media addiction to fast fashion.

View the embedded image gallery online at:
https://www.ceesa.org/archive/news/item/2659-ceesa-high-school-speech-and-debate-tournament-at-isp.html#sigProIdfcabae37c3
back to top