“Don’t Give Up on Your Dreams” at the ASW 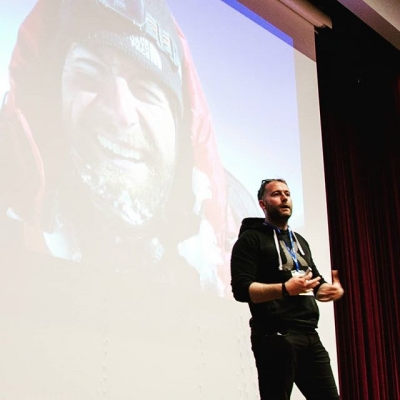 The ASW theater echoed with students' applause minutes before Spring break began, but the applause was not for the upcoming holiday.

James Ketchell, in what can only be described as an astounding presentation, had just recounted incredible stories from a life that has seen him rowing across the Atlantic Ocean, climbing mount Everest, and circling the globe on a bicycle, among other adventures.

It was a flat tire on an open cockpit gyrocopter, in which he is slowly making his way around the world again, that gave him the time to stop by and talk to students and present them with his philosophy on life.

His message was simple, which, put into our own words, goes something like this: don’t listen to those who say you can’t succeed, don’t give up on your dreams, ever. Whatever you think you can do, you can do, follow your heart and don’t give up.

James Ketchell is a serial adventurer, motivational speaker and Scouting ambassador. James became the first and only person to have rowed across the Atlantic Ocean, successfully summited Mount Everest and cycled 18,000 miles around the world in what the media dubbed “The Ultimate Triathlon”.