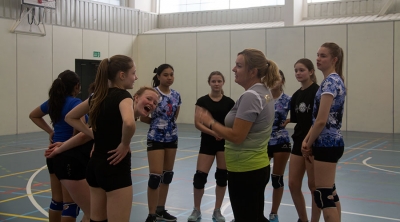 On Thursday 2nd May, TISA welcomed 16 female volleyball players from the UNHCR to come and compete against their High School and Middle School team players.

The refugee ladies team, HOMI, were so excited to finally get to play a competitive match - the team has been in existence for only a year - but their whole journey to creating the team has taken much longer. This project is led by Alexandra Allan, PTA Service Committee and Project Manager.

Habiba, one of the Afghan Community Leaders in Baku, felt there was a need to create a sporting programme for refugee ladies to help improve their wellness.  There are several teams for men to join but nothing specifically for ladies.  Habiba approached the TISA Service Committee for support setting up the team. Once we got approval from UNHCR to go ahead, we set out to find a court and a coach.

We found a court in the centre of town that all the ladies could reach easily and we were delighted when Susie, one of the TISA coaches, volunteered her time to train the team.  Six months after conversations began, on April 21st 2018, we finally had the first training session. Initially there were 20 ladies signed up, all beginners and the first session was spent trying to learn how to hit the ball and sorting out the net which refused to stay at the right height.  There were a lot of giggles but not many balls over the net!

Over the next few weeks, the girls grew more confident and word began to spread amongst the refugee community to the point where we ended up having to turn people away. As the team became more accomplished, they wanted to play more than once a week.  We couldn’t get any more time at the first gym so moved to a new court in a different part of town.  We also got a new coach Aysel who was available to coach the team 3 times a week.  With this extra cost the team needed more funding and is now jointly sponsored by the TISA Service Committee and the UNHCR.

It was with great excitement that the match began on Thursday evening. The team had a new team strip donated by the TISA Football Club and looked so smart.  With a huge team of supporters in tow, everyone was willing this to be a great match! HOMI won the toss and took the first serve. They played and won the first point and the match was truly underway…

The first set was won by TISA with a respectable score of 13-25.  By the second set the HOMI team had relaxed and overcome their nerves but TISA held on and beat them 23-25.  There were great rallies going on between the players and excellent assists and set pieces.  The players were changed around on both teams so everyone could have a go, and it was with great delight that HOMI won the third set 25-20, and then the fourth set 25-17.  Noise levels by this point were going through the roof and the 5th set was the first to 15 points.  HOMI was leading, then TISA, then back to HOMI until finally TISA managed to draw ahead and win by just 2 points 14-16.  It was an emotional rollercoaster and a great achievement from both sides!

We are hoping to find someone in the TISA Community willing to take over this very worthwhile project as Alexandra will sadly be leaving us next year. TISA would like to take this opportunity to say a huge thank you to Alexandra for her efforts getting this project off the ground.

View the embedded image gallery online at:
https://www.ceesa.org/archive/news/item/2620-unhcr-volleyball-team-project-at-tisa.html#sigProId6afe61c6a3
back to top