AISV Hosted The 8th Multilingual Tournament “I Speak, You Speak – We Communicate“ 2019 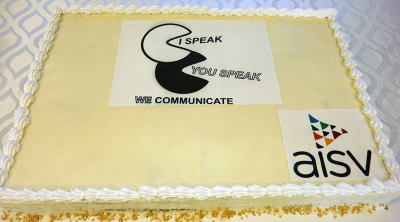 The participants were Grades 9-12 students who formed teams of three students each of them being able to communicate in no less than two non-native languages. Each team was able to perform assignments in three different languages.

AISV had two teams taking part in this event: AISV Team 1 – our Seniors: William, Virginija and Artem; and AISV Team 2 – our Grade 10 students: Marija, Tadas and Olesė who competed in their 3rd, 4th or even 5th languages.

The organizers of the tournament designed five different assignments. They were impromptu speaking based on a social ad poster; cultural kahoot on the countries where English, French, German and Russian are spoken; dubbing a short film in as many languages as a team can use; retelling stories of funny inventions in a chain; and finally, writing a motivational letter based on an Europass cv.

In addition, each participating team had to prepare homework – to create their own language and present it to other participants. The most creative and interesting languages and presentations were chosen by the participants, and the selected teams were awarded with special prizes.

The awards ceremony followed by a festive cake celebration. The participants of the tournament enjoyed taking part in this special event by mentioning the importance of the atmosphere at the school. Everybody is looking forward to next year’s tournament again!

View the embedded image gallery online at:
https://www.ceesa.org/archive/news/item/2619-aisv-hosted-the-8th-multilingual-tournament-i-speak-you-speak-we-communicate-2019.html#sigProId9b0035392f
back to top