US Language Week - the languages of love! 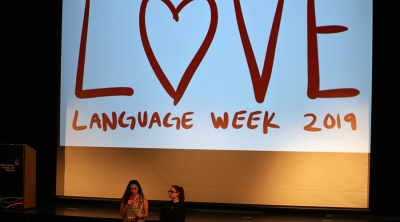 The week-long festival with the overarching theme - LOVE - was held at ISP in February.

This celebration of the linguistic and cultural diversity of ISP’s student body, which comprises over 60 nationalities! has become an important Upper School tradition with the first language week having taken place in 2005.

Language lessons are predictably a key part of Language Week. What was particularly special that faculty, who played largely a mentoring role during language week, learned about a new language along with the entire student body. A core team of around twenty students with overall 100 presented, taught or performed on around fifteen different community languages. Students were joined by external speakers who contributed to Language Week in addressing their understanding of love in their native language or languages.

See a snippet of Language Week.