The International School of Helsinki was pleased to host the CEESA Middle School MathCounts competition! 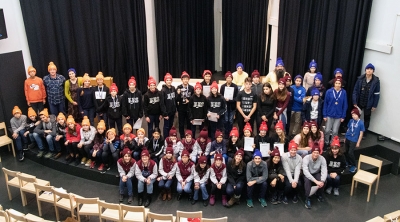 This year, the International School of Helsinki had the privilege of hosting the middle school CEESA MathCounts competition at the beginning of February.

It was a very snowy weekend here as we welcomed our guests.  There are math team students and their coaches from 6 different schools in the CEESA region:

We had 2 competition rounds to test the individual students' speed and problem solving in the Sprint and Target Rounds.. Then teams of 4 students put their minds together to compete in the Team Round.  During the Countdown Round, the top 10 finalists went head-to-head with their math skills and as they competed for the trophy!

We had various activities over the 2 days of the competition including workshops at the science labs at Helsinki University, games, crafts, and winter play.  The visiting math students and their coaches were a pleasure to get to know better.  It was a great success due to many host families, staff members, and volunteer high school students who helped everything run smoothly.  We look forward to our next CEESA event!