The CEESA Blue Division Volleyball Tournament at IS Belgrade 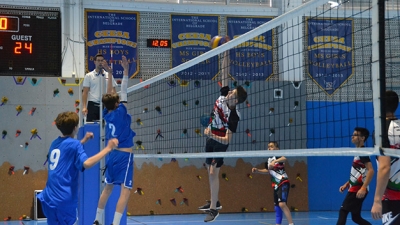 The CEESA Blue Division volleyball tournament was hosted by The International School of Belgrade over the weekend of May 10-13.

This event saw teams from Ukraine, Bulgaria, Macedonia, Finland and Serbia compete for the coveted travel trophy awarded by the Blue Division. The reigning champion Sofia Wolves were in fine form again on the court, as they went undefeated through pool play and would challenge the Helsinki Huskies in the final.

Helsinki had defeated the Belgrade Dragons in somewhat of an upset earlier in the day, and continued their run of good results to finish in second place after the round robin. The NOVA Supernova's and PSI Panthers were also challenging for a place in one of the trophy finals, and the latter took many teams to three sets to demonstrate the close nature of the tournament.

Championship Saturday saw Belgrade Dragons Yellow win their first set of the tournament, a younger developmental team, that will have better opportunities next year. NOVA would win the fifth place game in three sets. The third place game was contested by PSI Panthers and Belgrade Dragons.

The Dragons would establish a big lead in the first set and eventually win by two sets to zero, but the Panthers were in the game for most of the way. In the final Sofia Wolves demonstrated their dominance over the other teams and completed an undefeated weekend and reclaimed the trophy they had won twelve months ago in Kiev. The Belgrade Dragons Yellow team claimed the sportsmanship trophy and the weekend was a great success for all of the students, coaches and parents.

View the embedded image gallery online at:
https://www.ceesa.org/archive/news/item/2559-the-ceesa-blue-division-volleyball-tournament-at-is-belgrade.html#sigProId3a46e4ce6f
back to top