The Cultural Arts Festival at IS Prague 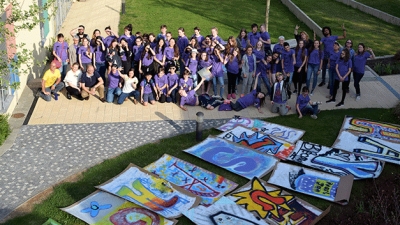 The goal of the Cultural Arts Festival is for students to witness, experience and learn about host country culture and to work with each other in creative ways. It is experiential and hands on.

The Cultural Arts Festival is very different kind of event compared to the various students’ CEESA tournaments. While all CEESA events empower students to work as a team, learn from each other and be good sportsmen they also tend to come down to competition.

Prior to the festival itself, students in their respective school’s work towards a completion of a pre-assignment that is in line with the festival theme.  As the overarching themes of this year’s event were Typography and Bookmaking students created and brought along alphabet books documenting their own cities.

Our goal here in Prague was to give our visitors a chance to truly experience the city of Prague - it’s vibe, architecture, flow, culture and the overall urban landscape.

The first day of the festival was hence dedicated to team explorations of different parts of the city with an emphasis on observation and recording (through sketching, making rubbings, a collection of artefacts and photography).  Students had both independent time (as a team and supported by some of our local staff) as well as an Alternative Prague guided tour taking them to some of the more grittier and hip parts of the city (such as legal graffiti zones or renowned art districts).

The lens for viewing the city-landscape was typography and letters of an alphabet. Students walked the streets of various districts of Prague paying attention to the letters and lettering on its streets - anything from tags, graffiti, street signs, store signs, letter-shaped twigs and stains counted. The goal was for each team (teams were mixed from students from across the various visiting schools) to collect/record every letter of the alphabet at least once on their independent and toured journey through the city!

During the second day of the festival, students took part in a series of workshops to further do with typography and bookmaking.

Thanks to one of our tech coaches and eternal maker - Liz Perry - they had a chance to learn some basic image transfer methods.

Students had a go at Urban Knitting - working with yarn as a drawing/writing tool and a grid of a fence as their canvas - experiencing this non-invasive way of intervention in an urban landscape.

Participants followed a lead of a renowned local graffiti artist ‘CLOSE’ to learn some basics of typography in context of graffiti - most students realized that using a spray paint to meet one’s vision is not as easy as it seems.

Finally, students made their own Prague journal by learning a fairly complicated type of Japanese book bind.

All of these activities culminated in a final session of bookmaking mayhem! Students got back together with their original school teams to create a Prague original alphabet book. Each book stood on its own while it was also a part of something bigger - our common experience of the city and our creative journey together.

The final books were diverse and very different from each other as each team took a slightly different approach to the making of their book. As students worked into pre-made concertina fold out matrixes many teams used methods they learned in the various workshops and hence spray painted or transferred photographs they took in the city.

The very finale of the event took the form of a lovely and perfectly sized exhibition opening of the various books created for and through the event.

Written by Petr Dimitrov, MS Art teacher at IS Prague

View the embedded image gallery online at:
https://www.ceesa.org/archive/news/item/2556-the-cultural-arts-festival-at-is-prague.html#sigProIdb94d7cb27c
back to top