Living History Day at the American School of Warsaw 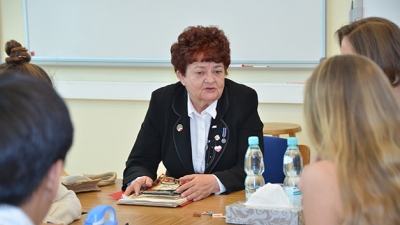 Students at the American School of Warsaw learn about history from the Polish Solidarity members.

On March 21, the American School of Warsaw hosted the Annual Living History Day.

The 8th graders interviewed participants of the events around the famous Gdansk Shipyard Strike, which marked the turn towards a successful organised resistance to the totalitarian Communist regime in Poland. After being greeted by the ASW Director Mr. Zurfluh,  the guests told their stories to students.

The members of the first nation-wide Unions, which offered a certain autonomy from the Communist state authority, often delved deeper into the recent Polish, but also central European history, covering fragments from World War II, the Warsaw Uprising, the deportation of Poles to the Soviet Union and their return -  the Sybiriaki phenomenon;  the Home Army, the Outcast Soldiers, the attempts to reorganise the Hungarian (1956) and Czechoslovakia’s (1968) communist parties that ended up in occupation and oppression from the Soviet Union, the students’ strikes in March 1968 in Polish Universities, or the June 1976 protests.

The main focus of the information transfer between the guests and the ASW learners was the guests’ personal involvement with the Solidarity Union and their perspectives on the importance of non-violent opposition and civil resistance to the Polish Communist authorities.