A Sympathy Protest: Simulations and Role Play as a Vehicle for Language, Culture and Content in the Language Classroom by Lori Langer de Ramirez

Participants will come away with ideas and resources for designing and developing a simulation or role play in their own classes.

Simulations and role plays can be used to great effect in the World Language classroom. Students can take on the roles of characters in a historical event, a work of literature, or any story and, by taking on new identities, they can delve more deeply into diverse cultural perspectives. Accompanied by real-world tasks and critical thinking activities, simulations can be engaging, pedagogically sound, and fun! Explore several classroom simulations including one for intermediate Spanish students called "The Politics of Art - A Sympathy Protest." Participants will come away with ideas and resources for designing and developing a simulation or role play in their own classes. 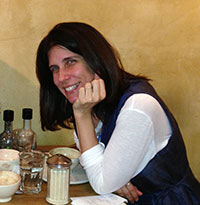 Dr. Lori Langer de Ramirez began her career as a teacher of Spanish, French and ESL.

She holds a Master's Degree in Applied Linguistics and a Doctorate in Curriculum and Teaching from Teachers College, Columbia University. She is currently the Director of World and Classical Languages & Global Language Initiatives at the Dalton School in New York City. Dr. Ramirez is the author of several books, including Empower English Language Learners with Tools from the Web and Take Action: Lesson Plans for the Multicultural Classroom, as well as several Spanish-language books and texts. Her website offers free materials for teaching Chinese, English, French, and, Spanish.